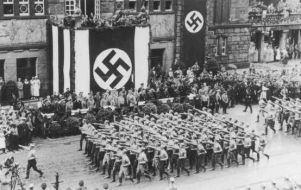 For evil to thrive, all it takes is for good men to do nothing …

This used to be an abstract notion for me.  I thought about people like Hitler, Mussolini and Stalin, and how those dictators were allowed to control and flourish, primarily because no one stood against them.  They were able to incarcerate or murder millions of people, while good men and women just stood and watched.

When I thought about these men, and the climate that created them, I didn’t feel the scope or intensity of what they did, at least not on a visceral, organic level.  I felt some sorrow and sadness for the people that they victimized, feelings of regret that it had happened at all, and some vague, largely undefined commitment that it should never happen again.  But, it never felt personal.  It never seemed really real.

Now, I understand how it happened.

I realize that my experience was on a very, very small scale.  But the micro can and has become the macro.  And, although it is a scary thought, that experience taught me a valuable lesson.

I am working in Saudi Arabia on a business visa.  This visa requires that I go to Bahrain, which is only about an hour away, every 30 days.  There are several teachers doing this.  One beautiful Friday morning about a month ago, four of us were waiting for the van to take us to the Bahrani border.  I was really looking forward to the trip, because the company had agreed that we could go into Bahrain and spend the day there (The Magnificent Seven, here I come!).

All four of us were American.  Two women, and two men.  Predictably, we began to reminisce about home.  The beautiful beaches of southern California, the great food in San Francisco, the endless green landscapes in North Carolina.

Also predictably, the conversation turned to the US Presidential race.  I talked about how the San Francisco Bay Area is a bastion of progressives and liberals, albeit getting more and more expensive to live in.  The other woman in our group was from southern California, and she also expressed that her area, San Diego, was largely liberal.  The guy from North Carolina expressed some middle of the road views; although from a southern state, he was a white male who had attended a HBCU (historically black college/university).

One of the men, who happened to be married to a Russian and lived in Thailand, turned to me and said, “You’re a liberal.  I know you are.  You said you are.  I’m not.  I’m in favor of Trump.  He’ll straighten out everything.”  I tried to protest, tried to explain my political positions.  I couldn’t.  His voice rose as he went on: “No, no, you’re a liberal.  I know you are.  I don’t want to hear it.  And, I won’t even begin to talk about black racism against white people.”

I then tried to shut out the yelling and ranting, and began to email our director about what was happening in the lobby of the apartment building.  I caught occasional words about “immigrants, black people, women, Muslims, America …”

Finally, I turned to him and said “You can kiss my black, female, rusty racist ass.’  I moved away from the group.

During that horrible experience, I learned how hate proliferates.  I learned how Hitler, Stalin and Mussolini had become powerful.  Not because all of the people necessarily wanted them, but because the vast majority had done nothing to stop it.

When you allow hate to flourish, when you do nothing, you are complicit in the process.  Saying and doing nothing says and does everything.

Now, it has happened on the world stage.  Now, Donald Trump is our President-elect.  Probably because so many people said and did nothing.

This particular teacher was fired the next day.  After all, this is Saudi Arabia.  They, at least, did something.