Welcome back to the Middle East.

I arrived in Dubai somewhat worn out from the 16 hour flight. On the flight, I had slept a bit, watched a few movies – Get on Up is actually a good film – and eaten some passable airplane food. I’m happy that Emirates Air feeds their passengers! Fortunately, I was sandwiched between two very nice guys who didn’t complain or talk too much. One of them was pretty much a drunk, but at least not an obnoxious drunk. I swear he had almost every drink on the menu: brandy, beer, whiskey, and wine – everything but vodka, and he was a Russian!

I had a short, one hour flight from Dubai to Dammam, and after spending the night in Dammam, I took a train to my final destination of Al Ahsa (some say Al Hassa), in the eastern province of Saudi Arabia. My company had bought me a first class ticket, so I was in a wide, comfortable seat. And, if I recall correctly, the most expensive ticket is 100 SAR or about $30 U.S. On the train, a server went from car to car offering free Arabic coffee and tea. Of course, they also offered other paid snacks. There were no signs warning you to watch for isolated bags. There were no passengers looking at other passengers suspiciously. (Is an American about to blow up the train???) There were no whispers or sneaky pointing fingers. There was just a clean, modern, quiet ride across a vast landscape of never ending — sand dunes.

The train is about a two hour ride from Dammam and Riyadh, so I will be able to visit friends in both cities on weekends. I am looking forward to seeing new sights in Dammam, and familiar haunts in Riyadh. At heart, I am a small town girl, so I think it will be much more comfortable for me living in Al Ahsa than in a large city like Riyadh.

It is somewhat of a relief to get away from the endless debates about race and the ongoing, unresolved discussions about skin color. I have been living actively in that quagmire for many, many years. I realize that “race relations” are an ongoing and potentially unresolvable issue in my home country. Some things have gotten better (de jure segregation), some things worse (black men again dying without even the pretense of due process), and some haven’t changed at all (being looked at suspiciously in Neiman Marcus).

Coming back to the Middle East helps me to remember my amusement and amazement that there are people in this world who ludicrously believe they are better based on their skin color.

Welcome back to the Middle East! 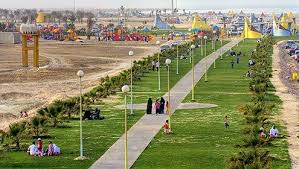