I recently went to Abu Dhabi on a “visa run.” I had to renew my Saudi visa before it expired, and the company sent me to Abu Dhabi for a few days to do so. It was good to get away. I slept late, and felt grateful to be able to shed the abaya and hijab.

Abu Dhabi is a beautiful city. It is on an island sitting in the Persian Gulf, and is surrounded by many smaller islands. The water is a beautiful sapphire blue, and there are parks, beaches, and lots of green. The city has a decidely Western feel to it. And, were it not for the proliferation of thobes and abayas, I could easily imagine being back in San Francisco. The weather changes from warm to an evening cool and the city is brightly lit at night – like a perpetual Christmastime. And women are driving! Women in abayas and hijabs. Women in shorts, slacks and skirts. This is a sight I have not seen for months. A welcome sight. I had almost forgotten that women and can and do drive freely in some places in the Middle East.

The diversity of Abu Dhabi is pretty incredible. I have seen and heard more than a half dozen languages, including German, Spanish, French, Mandarin, Hindi, and of course Arabic and English.

The malls and the movie theaters are plentiful. They even offer movies in 4D! I could not find a 4D movie that interested me, but I did see two movies. I saw 12 Years a Slave which was seriously inauthentic, despite being based on a true story, and I saw the remake of Robocop (a really good remake – even better than the original). I went to the VOX Cinema where it cost only 35 dhr, or about $12. The screen was superwide, and the seats were large and comfortable. I truly love the whole movie experience. And I heard music. I heard Pharrell, Robin Thicke and One Direction blasting in the malls and supermarkets. I almost started dancing! In Riyadh, public music is “haram” or forbidden. In Abu Dhabi music, sweet music, is everywhere!

But one caveat, particularly for single women, and maybe single everyone, beware the taxi drivers. I was aggressively propositioned by two taxi drivers, both Pakistini. This shocked me, because in Riyadh, a driver wouldn’t dare proposition a passenger, at least not openly. One driver in Abu Dhabi was even so bold as to ask me to buy him some cologne, and insisted on getting my cell phone number. I took his number, and promised to call him – and of course I never will. The other driver introduced himself and, upon shaking my hand, held onto it just a little too long, and creepily stroked my hand with one finger – yuck! He then made a very big deal out of announcing his single status. When we finally got to my hotel, I almost jumped from the car. Beware single folks, beware. I am convinced that the UAE has a brisk sex tourism trade going on.

I will return to Abu Dhabi later this month with my daughter, and will see more of the city. There is sometimes strength and safety in numbers, and Herbie Hancock is playing at the Emirates Palace. What more could a girl want? 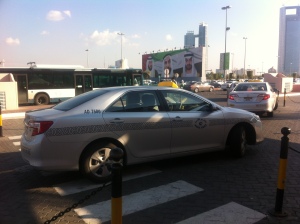 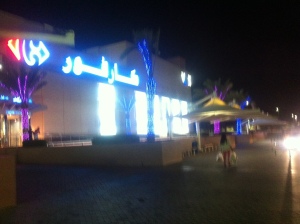 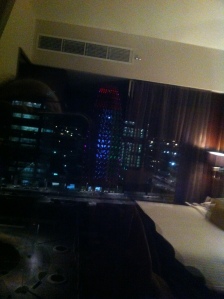 A View from my Hotel Room

2 thoughts on “Abu Dhabi Here I Am”