Riyadh is a growing city.  The city now has a population of about 4 million, and that number is going up.  There is so much building that you can hardly pass a block without a seeing a house or building going up, or one being torn down for a new and improved dwelling.

The country is enjoying an economic boom, and being the oil rich nation that is the Kingdom of Saudi Arabia, the boom has probably been going on for a while.  Not that there aren’t poor people because I’ve seen a number of young men walking through traffic and begging for money.  But, I haven’t seen homeless people occupying the fronts of buildings or hanging out at bus stops

I’ve been trying to determine exactly where downtown is, but haven’t yet figured that out (and yes to all of you cynics, if I could drive I’d probably know where downtown is by now).  I’m told that Riyadh does indeed have a downtown and it is as hectic as any downtown in any large city.  I’m not quite sure about that, as the person who told me had never been outside of Riyadh.

The houses are beautiful, and look like mini palaces.  There are usually two entrances, one for women and one for men.  There are also usually bars on the windows with heavy shading.  I believe that this is to help retain the modesty of the women and to keep potential peeping Toms from even attempting to peer inside.  But, I would love to have a peek inside one of these homes.  I’ve heard that they are lush and beautifully furnished.  Hopefully a bit differently than the furniture in my flat, if I am to believe that it is indicative of Arabic furnishing.

Since I am a non-citizen, I cannot buy or hold property, but you never know what the future holds. 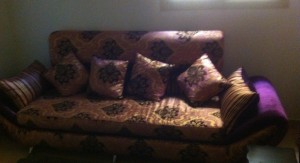