Yesterday, I decided to use the maps application on my Iphone to walk to the Basilica Cisturn.  The map indicated that it was only one mile away and I thought a two mile walk would be good for me.  So, I did as I was instructed by my daughter Leila, and followed the blue dot.  Guess what?  I made it there!  It was a great walk, and along the way I learned what district I live in, and even what neighborhood (The Fatih district and the Kadirga neighborhood).  Kind of scary.   I am feeling less like I’m in a foreign country, and more that I am living with a great group of people.

Does anyone out there remember Sean Connery as James Bond?  I know I’m dating myself, but he was (and is) my absolute favorite Bond.  Although Daniel Craig is running a close second.  In the film, From Russia With Love, James Bond takes a ride through the Basilica Cisturn, referred to in the movie as a reservoir (which it is) built by Constantine (which it wasn’t).  I was thrilled to be there.  I paid the $5.00 entrance fee, rented a pre-recorded electronic guide and walked down the stairs into the golden lit, column filled reservoir.  I was instantly awed by it, and instantly hit with a unexpected case of vertigo.  I didn’t realize that what I was walking on was a connection of bridges about 6 feet off the floor of the reservoir.  The vertigo forced me to walk slowly and carefully, so I got a really good tour of the reservoir.  It is magical and filled with history.  There is a column of tears and two columns of Medusa’s head turned upside down and sideways, just in case she got the notion to turn you to stone.  I took photos, but for some reason, all I got were blue flashes.  I’m waiting for my daughter to explain why :-).  So, the photos you see here were downloaded from the internet, as was the You Tube video.  The video reflects my experience of the Cisturn.

As I walked up the stairs and away from my vertigo, I passed through the Hippodrome once again, and stopped to get some freshly squeeze pomegranate juice.  The juice is everywhere in Istanbul and only costs about $2-4 for 12-16 ounces.  A real bargain when you consider that in the Bay Area, pomegranate juice is quite a bit more.

I walked back to my hotel by reading the street signs.  What an accomplishment! 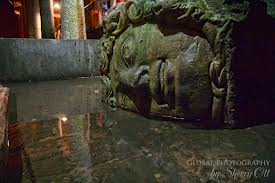