Think of a mall, but unlike any mall you’ve ever seen. This mall has many, many corridors, looks like a palace from Arabian Nights, and is filled with anything and almost everything. I walked into the Bazaar and was immediately overwhelmed. Stores with jewelry, leather goods, Turkish rugs, shoes, clothing, souvenirs, were side by side and filled to the brim. Store clerks and owners stood outside and hawked their wares, beckoning and calling to me: “lady, lady, this way, I’ve got something to show you.” I responded to one clerk selling rugs that I did not want to buy a rug, and rather than stopping him, I inadvertently engaged him. “Why not? Everyone needs a rug. Come in, let me show you.” So I went in, continuing to assert that I did not want a rug, while he continued to pull out rug after rug, going lower on the price, and causing me to feel some pressure to buy. But, as I explained to him, I did not come in to buy a rug, whether it was $250 (the lowest) or $1,000. He reluctantly, and not without some hostility, finally backed off and offered his business card.

I again encountered another Turkish merchant who insisted that he was not trying to sell me anything, and offered me some hot apple tea. (Delicious, by the way.) As we sat and sipped, he pinpointed my accent for a Texan (Wow!) and went on to explain that he was 53 years old, had three children, and was divorced from a woman who, as he apologized, was “a slut and an alcoholic.” He then insisted on taking me to dinner. I deferred and asked if we could go the following day. Of course, I would come to him and we could go to dinner from the Bazaar. I collected his phone number and address; he did not collect mine.

So many interesting things at the Grand Bazaar! 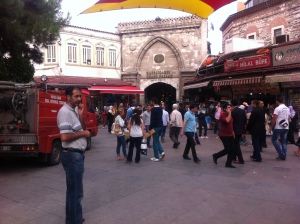